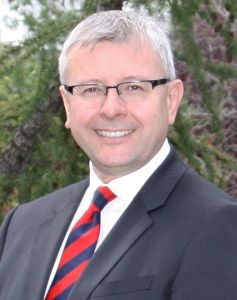 Ron Hoffmann, appointed as Alberta’s Senior Representative for the Asia Pacific Basin in the fall of 2014, is a western Canadian who has dedicated most of his professional life advancing Canada’s interests on the world stage. He has spent much of his diplomatic career in Asia, including serving as Ambassador to Afghanistan during the height of Canada’s military, diplomatic and development deployment. He was Ambassador to Thailand, with cross-accreditation to Burma, Cambodia and Laos, and served in the Canadian Embassy in Beijing as Commercial and Economic Counsellor. Earlier in his career, he held key positions in Canadian missions in London, Johannesburg and The Hague.

In Ottawa, Mr. Hoffmann was most recently Director General for Strategic Policy at Canada’s Department of Foreign Affairs, Trade and Development. From 2012-2013, he was Senior Advisor on Asia Strategy and Policy, reporting to Canada’s Chief Trade Commissioner. Ron has served on advisory boards and leadership councils and lectures frequently on foreign policy and international affairs. He was elected in 2016 to the Executive Committee of the Canadian Chamber in Hong Kong, the largest Canadian Business Chamber outside of Canada. He was subsequently appointed Vice Chairman (External Relations).

Based in Hong Kong, Mr. Hoffmann works closely with Alberta’s international offices across the region to promote high level and outcome-oriented engagement among Alberta government and business leaders and Asian counterparts. He is Alberta’s senior voice in Asia, fostering greater awareness of opportunities to establish and expand trade, investment, innovation and governance partnerships.