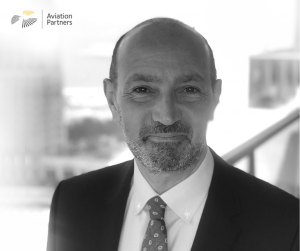 As CEO of Aviation Partners Captain Mark Burby is a seasoned creator of disrupter model businesses. He started adult life as a Royal Marine Commando operating in one of the most elite Special Forces military units. Upon completing specialist military service, he was recruited into banking and corporate finance; quickly absorbing the skills of business by learning from the front line of business financing. Mark was responsible for assisting leisure, and real estate businesses structure their business models to obtain the funding they needed to implement, grow, and exit. Not satisfied with doing that for others he went on to acquire real estate in the leisure sector; selling or leasing to household commercial names. Culminating in creating one of the largest out of town commercial leisure parks in Scotland which was the first of its kind.

Broadening his commercial experience, Mark became CEO of CBTL and acquired the rights to Coffee Bean & Tea Leaf in Europe; whose main rival, at the time, was Starbucks, in the days when the branded coffee outlets were a new and developing concept with Caffe Nero having only 6 outlets globally.

Going on to achieve another first, Mark was CEO of Reebok Sports Clubs and created the mammoth 130,000 square foot sports club at Canary Wharf London, described as Europe’s largest urban country club. Being told he could not make a financial success of such a big club in the centre of high-end corporate real estate, he went on to prove everyone wrong; his business model required 2,200 paying members to break-even – it quickly grew to 10,000 paying members.

Having convinced Canary Wharf they needed him more than he needed them, they agreed on a deal allowing Mark to develop an entire block. Making him the only person, at the time, allowed to construct an entire grid on the Canary Wharf estate. He also negotiated with Reebok to brand the business; paying him at a time when Reebok only charged businesses for use of their brand.

Mark was also the principal and CEO of the first commercial Helicopter Search and Rescue operation at a time when only the military-operated SAR in the UK. As CEO, Mark created yet another disrupter business by transforming SAR operational execution. His organisation trained experienced medical professionals to become SAR air-crew at a time when the industry did the opposite. Resulting in more skilled and experienced medical teams that took less time to train. This forged close relations and operational co-operation between the military SAR organisations and his organisation. It is now standard practice that UK SAR operators are commercial civilian organisations whose crew are medical professionals before becoming air-crew. In honour of this operational achievement, the post office issued a 1st Class Postage Stamp and First Day Cover. 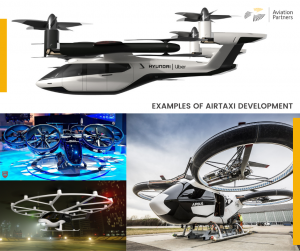 This extensive business experience combined with aviation experience set about the creation of another disrupter model; focusing on the future of vertical lift aviation and how it is to be served, trained, and its ultimate financial success in the current business climate of brand value, service delivery value, and dominating such provisions to aviation operators.

The vertical lift industry is going through an exciting time of development with many well-known global organisations well beyond the concept stage of the urban air taxi. The concept of changing the way we travel, in and around the urban or wider metropolitan areas, is at an advanced stage with the creation of flying assets. Companies such as Airbus are aiming for low airspace passenger transportation in autonomous flying vehicles that can best be described as drones for passengers. But whether people are ready for pilotless flying machines is yet to be seen. But one thing is for sure, air taxies are coming, but probably piloted to start with; from Airbus, Volocopter, Bell, and Uber to name but a few. The race has well and truly begun, with many already undergoing flight testing.

Now described as the vertical lift industry, Vy in aviation abbreviation, because the future of helicopter transportation is about to change, and change in a manner that is similar to the playing of music on an iPod, not a Walkman. So much so Bell Helicopters – one of the largest helicopter manufacturers, has dropped the word helicopter and rebranded to Bell Flight, also changing its logo to identify the future as anything that can create vertical lift. Vertical lift includes helicopters, drones, and air taxies.

The route to market for creating this has fewer hurdles than may be expected from an operational aspect. Air taxies are going to operate at a low level in airspace that is rarely of conflict, or importance, to military security, and this can easily be managed close to major airports and restricted airspace. In many cases, there are established procedures for low flying helicopters with routes and areas designated as safe for rotary operations. That said, as an example, His Highness Sheikh Mohammed bin Rashid Al Maktoum, Vice President and Prime Minister of the UAE, and Ruler of Dubai issued a new law in July 2020 outlining the regulations governing drone activity in Dubai; paving the way for airspace use for the future of air taxies. So, just like your next birthday, vertical lift movement of people is coming. So, whilst the aviation industry is creating the assets, the countries, or regions, that are first-off-the-grid to create the infrastructure will dominate vertical lift operations, and reap the financial windfall.

Aviation Partners created the commercially viable business concept of vertical lift infrastructure of tomorrow for a GCC country. Creating a functioning business plan, operations plan, and detailed financial modelling; demonstrating the commercial viability that most major urban areas can adopt. Consequently, demonstrating that it was not only commercially feasible, but it was also an outstanding financial opportunity.

Aviation Partners created a model that enables the capital cost of the infrastructure to be fully recovered in a short space of time, possibly even before construction completes. Creating an operations plan that resulted in successful EBITDA shortly after becoming operational. Through Mark’s leadership, Aviation Partners created a model where the operations had an equal if not greater engagement from the luxury hospitality sector and the luxury brand sector than it did from the aviation sector. Aviation Partners were consequently successful in obtaining unprecedented engagement from many of the household and industry names in the aviation and hospitality sector.

Hailed as a disrupter model the project was recognised by a GCC country as having major potential for the future of aviation and unexpectedly for Aviation Partners, was quickly acquired by a GCC sovereign investment fund for implementation in a GCC region. Aviation Partners have retained the right to implement, refine, and advance the business model in any other jurisdiction or other GCC regions.

As CEO, Mark is now setting up A viation Partners to engage with, or partner with, other organisations and other jurisdictions. Seeing where the industry is heading when others may not be aware of how quickly it is evolving, Aviation Partners has demonstrated how valuable early insight is.  The future of vertical lift and future of travel around major urban hubs and the wider metropolitan areas is on course to change dramatically.

Connect with Captain Mark Burby on LinkedIN or by email via jody.clarke@aviation.partners