China’s Belt and Road initiative, launched in 2013, was presented to the world as a benign contribution to global development, but that also acknowledged that there would be benefits for China itself. It was suffused with a discourse of peace and friendship among nations. Few observers accept such a presentation at face value, but the reaction of most American analysts and policy-makers has veered to the other extreme and has demonised China’s policy and the supposed strategic thinking behind it. This is partly because ‘political realism’ (whereby states can only gain power at the expense of others) is the dominant framework concept in American International Relations analysis. ‘Political realism’ obviates the need to look far for an explanation of China’s policy. Since the effects are, almost by definition, damaging negative for the United states, the intent must also be malignant. Any supposed explanation for that malignancy will suffice, and more than one will feed an interesting debate, which is always good for the ‘citation scores’ by which academics advance their careers and prestige. Equally, since state action forms the object for analysis, political realists have no need for research into (or even acknowledgement of) any other domestic actors and pressure groups involved in the making of Chinese policy or, especially important in the Chinese context, in its execution. Furthermore, there is little need to research into explanations of the decisions taken by partners involved in working with China. They are portrayed either as being political sympathisers, morally corrupt or compliant victims of China’s naked ambitions. ‘Political realism’ permeates most think-tanks, it has infiltrated the assumptions of the two main political parties and it shapes the foreign policy of the US government.

The ‘rise of China’ was always going to pose a problem for the United States, but ever since China has become the second economy, behind the United States, its ‘rise’ has mutated into a ‘threat’. Washington’s attitude has been shaped by the failure if the rival analytical paradigm, ‘liberal institutionalism’, which had predicted (naïvely) that China’s increasing involvement in international institutions would shape its domestic agenda in a more liberal/democratic direction. Add to the mix a large dose of ‘American exceptionalism’ to the mixture and the stage is set for a new ‘cold war’ – increasing trade restrictions, a renewed emphasis on strategic self-reliance, a struggle for establishing technical standards and a ‘rival’ BRI form the road map for the future.

There is an alternative approach and that is to place China’s activities in a comprehensive, fact-based international context. Let us take one example. In March this year, the US Council on Foreign Relations published a report, China’s Belt and Road: Implications for the United States. Among main points was the fact that ‘BRI port projects have significant strategic implications for the United States’ since they give China leverage over the host country and could offer opportunities for intelligence gathering and support for naval operations. To illustrate the danger, it published a map showing 93 locations in which Chinese companies owned, or part owned, port facilities. 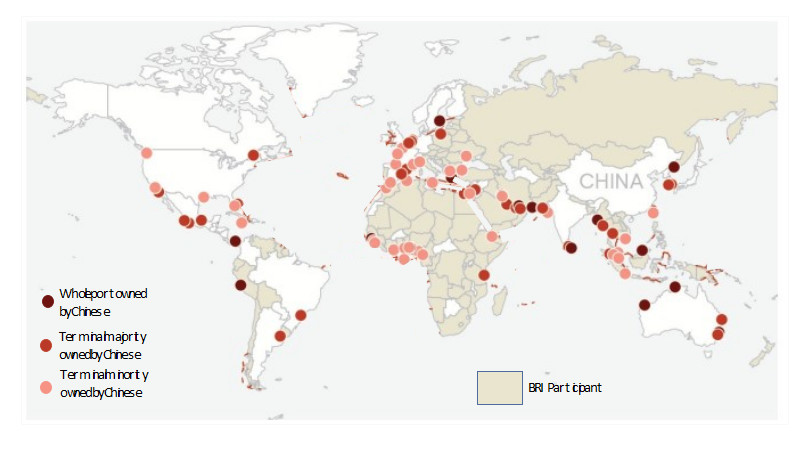 Source: Adapted from Council on Foreign Relations, China’s Belt and Road: Implications for the United States, 2021, 66.

The first thing to note is that the map gives the impression given is that China possesses a ‘string of pearls’ (to use a phrase first employed in this context in XXXX) of naval assets in strategic locations around the world. The second is that although the map makes the distinction between port ownership and terminal ownership, this distinction is lost in the analysis. In fact, in the ‘strategic’ areas of the South China Sea and the India Ocean, Chinese companies only own three ports – Gwadar in Pakistan, Hambantota in Sri Lanka and Kyaukpyu in Myanmar. Gwadar port is supposed to provide a short land route to Southern China (supposedly to avert the threat of a blockade in the Malacca straits). If that is the intention, then China is surprisingly nonchalant in its preparations. Scarcely any ships visit the Gwadar port and there are no pipelines, railways or even highways under construction linking the port with Kashgar. A similar logic supposedly drives Kyaukpyu. Here the gas and oil pipelines to Kunming are operational but the plans for the railway were revived only in January 2020, the same month clearance was given for the construction of a small container port. Hambantota, whose strategic importance is that it lies close to the major east-west shipping lines, has developed to nothing more than a car park. It receives visits from one or two car carriers a week which deposit vehicles for transshipment.

The main function of port-operators is to own ports. Shipping companies may also do so. The 93 Chinese foreign ports are mostly owned by two state-owned firms – COSCO (China Overseas Shipping Corporation) and by and CMP (China Merchant Ports). To put this in context, I have analysed the port ownership (for container ports only) of the two main European companies A.P. Möller (APM), which is the port-operating branch of the Danish shipping company, Maersk and the French port operator CMA-CMG. Comparing the two maps, it is clear that the global distribution of Chinese-controlled foreign ports is similar to that of Europe’s two largest companies. 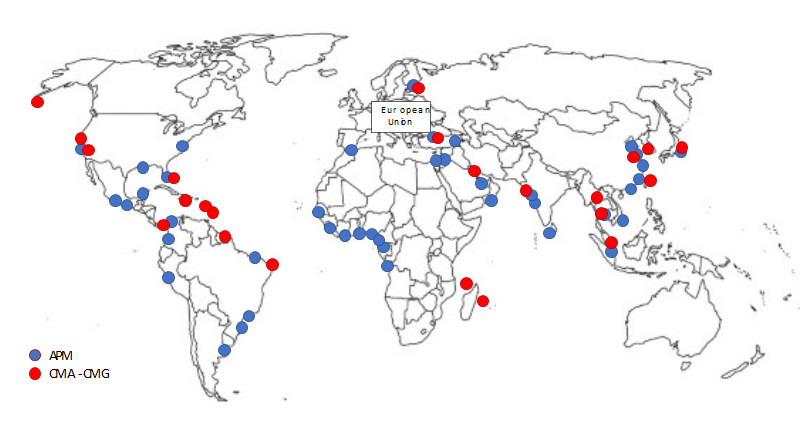 Counting ports and speculating on their ‘strategic’ or naval potential is one thing, but for the economic impact implicit in their ownership, we have to account for the trade conducted through those ports. We have detailed data for container ports. Containers make up about one-quarter of world shipping by volume, but three-quarters by value.  Moreover, the port handling is the most sophisticated. In the analysis we have to distinguish between the total throughput of the port, and the share of the port operator in that total. This is known as the ‘equity adjusted throughput’. China is represented by Cosco and CMP, which are the first and seventh respectively in the global rankings. Europe is represented by APM and CMA-CM which are ranked third and eighth. To complete the assessment, I have added the ‘foreign’ data for SSA Marine/CARRX and Ports America (the largest US container port operators) to the comparison. SSA Marine is ranked ninth but Ports America falls outside the top-twenty altogether.

Let us look at the graph from the bottom. The lowest series uses the data that determined the rankings.  It shows China’s lead ahead of the two European operators, but the huge gap between them and the two largest American port operators. The second series shows the effect of owning small shares in large ports. This affects the two leaders more than it does the United States, and China more so than Europe which moves ahead in this series. The third and fourth series repeat the analysis but after removing the ‘home’ ports from the totals. In Europe’s case, the home base has been the entire European Union. It shows that China’s global leadership relies heavily on its home port ownership. By either measure, the foreign port ownership of the two European firms is over twice that of China.

The implications are two-fold. First, it shows that by leaving the question ‘What is the threat of China’s port ownership?’ and asking instead, ‘What is happening with Chinese port ownership?’, we open a completely different perspective. Second, bearing in mind that China is responsible for 18 per cent of world maritime trade, one could argue that China is underrepresented in foreign port ownership. If we accept that position, then with the USA responsible for 16 per cent, it is woefully adrift. It is the USA, through its neglect of involvement in the logistics of foreign port ownership, that is the exception – not China.