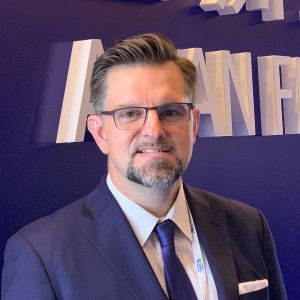 PBEC, founded in 1967, is a membership organisation of CEOs and Business Leaders with a footprint that includes the 21 economies of APEC. PBEC remains the independent voice of sustainable business and trade in Asia Pacific.

Walsh was previously the Chief Executive of the award-winning Hong Kong based brokerage company Asia Jet & Chief Commercial Officer of Hongkong Jet and BAS Guernsey both commercial charter operators. Prior to that he was a Board Director of Jet Edge International in the USA and Air Charter Service PLC out of the UK and its subsidiaries in the USA, Russia, Dubai and HK. He has also previously worked and been commended for his service as a contractor for the United Nations – UNHAS division and for Dept of Foreign and International Development of the UK Government.

Michael has enjoyed a fruitful career in a variety of roles within the air transportation industry – Board member, Commercial Sales, Marketing, Public Affairs, Crisis Management, Humanitarian Relief, Events, Sponsorship and Communications in Hong Kong, across Asia, the UK and Europe, CIS, Middle East and USA.

His passion extends to youth engagement and philanthropy. He was the founder of a Educational Program called “Student Discovery”, which has hosted several thousand students from across the region over the past four years. Its mission, as part of his association with AsBAA, is to educate young people about the benefits of Business and General Aviation. Walsh also created an annual black-tie industry event that raised significant sums for the Orbis charity over the same period. He has continued to work with several Government agencies around the region to advocate for new, smart city and airport infrastructure.

Walsh is on the Board of Governors for AsBAA – Asian Business Aviation Association; he sits on the organizational committee for major events in Greater China. Walsh is an advisor to Frost & Sullivan and MAHB in Malaysia. He holds a master’s degree in Finance & Accounting and a MSc in Economics. He is a Part Qualified Management Accountant and a Graduate of the Institute of Chartered Secretaries and Administrators. Walsh is married with two children.