ES.1. TOWARD A PRIVATE SECTOR–LED AND
PRODUCTIVITY-DRIVEN GROWTH PATH 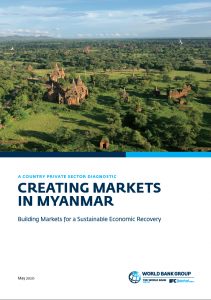 Like many successful transition economies, Myanmar has the potential to sustain a high growth rate for the next two decades. The country began a historic triple transition in 2011: from conflict to peace, from military to democracy, and from isolation to global integration. Economic transitions are complex to manage but hold great promise, as they can dramatically boost growth, create jobs, and reduce poverty through a more efficient allocation of resources and increased productivity. After transitioning from a planned to a socialist market economy, China’s economy grew at an average rate of 11 percent and created 12 million jobs annually between 1979 and 2009. In the first two decades of its transition, Vietnam achieved 7 percent annual growth and reduced its poverty rate from 72 percent to 17 percent. Poland, beset by authoritarianism and socialism at the time of its transition, raised its per capita income from US$1,700 in 1990 (similar to Myanmar’s current level) to more than US$15,000 in 2018. Myanmar, seen as the next successful transition economy, has shown considerable promise. But it is also encountering many pitfalls as it negotiates not only an economic and political transition, but also the transition from decades of conflict to peace.