Indo-Pacific framework to begin with 13 nations, including India 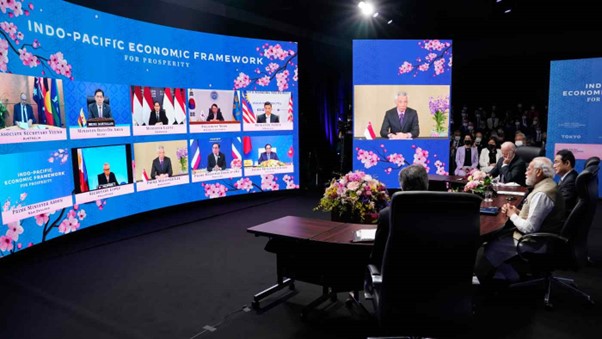 TOKYO — The U.S. government has announced that its new economic grouping for the Indo-Pacific will begin with 13 inaugural members, accounting for about 40% of the world’s gross domestic product.

Taiwan was not included, nor were Myanmar or the China-friendly members of ASEAN, Cambodia and Laos.

Eleven of the 13 countries in the IPEF — all but India and the U.S. — are part of the Regional Comprehensive Economic Partnership (RCEP), the world’s largest trade bloc, and together account for 30% of the world’s GDP. China also belongs to RCEP.

Speaking at the launch event in Tokyo, President Joe Biden said that the future of the 21st Century economy will be written in the Indo-Pacific. “We’re writing the new rules,” he said.

“The key to our success will be the framework’s emphasis on high standards and inclusivity,” he noted, adding that the IPEF will be “open to others who wish to join in the future.”

Biden, Japanese Prime Minister Fumio Kishida and Indian Prime Minister Narendra Modi participated in the event in person, while other leaders joined online. Modi said: “It is necessary that we find shared solutions to the economic challenges of the region and that we make creative arrangements.”

According to U.S. officials, the IPEF will focus on deepening cooperation between the U.S. and its Asian partners along four pillars: supply chain resiliency, clean energy and decarbonization, tax and anti-corruption, and trade.

The Biden administration hopes the IPEF will boost the U.S. economic presence in Asia, especially as China increases its clout.

The launch of the group marks “an important turning point in restoring U.S. economic leadership in the region, and presenting Indo-Pacific countries an alternative to China’s approach to these critical issues,” Commerce Secretary Gina Raimondo told reporters in an online briefing.

But unlike traditional free trade agreements, such as the RCEP and the CPTPP, the IPEF does not lower tariffs. The Biden administration, like the Trump administration before it, sees unfettered trade liberalization as harmful to ordinary U.S. workers and prefers a more tailor-made approach to economic integration.

U.S. President Joe Biden leaves after attending a joint news conference with Japan’s Prime Minister Fumio Kishida, after their bilateral meeting at Akasaka Palace in Tokyo on May 23.    © Reuters

Raimondo said the IPEF was “designed as a more innovative and flexible” approach, since such issues as supply chain resiliency and environmental protection have become more vital for many economies.

“The most pressing issues that we need to tackle with our allies have changed,” she said. “We need a new approach, going forward, if we’re going to meet the needs of our citizens. So by focusing on economic priorities that affect all of our economies, this framework is designed to reflect the shared realities we face.”

Without offering lower tariffs, some analysts say the IPEF will have limited appeal to counties that want more access to the U.S. market. Still, the White House has succeeded in convincing several emerging economies to join. India, notably — which withdrew from the RCEP negotiations due to fears over the impact of free trade on its farmers and businesses — agreed to join the new framework.

Raimondo stressed that the IPEF would still benefit such countries: “Many U.S. companies are looking to diversify away from China. Countries, [such as] Vietnam, Malaysia, Indonesia, that are actually signed up and in the Indo-Pacific framework, will obviously have the advantage to get business from American companies because they will have signed up to be the high-standard agreements that we plan to sign pursuant to the IPEF.”

Following Monday’s launch, the 13 IPEF participants will start negotiations on each pillar. “There will be firm commitments, there will be signed agreements, and like any agreement, we plan to have high standards, a commitment that will be enforceable,” said Raimondo. The U.S. has also said the IPEF has an open architecture, meaning more members may be added in the future.

Taiwan was not included as a member, despite the island being a key node for the global semiconductor supply chain. Taiwanese authorities reportedly sought membership in the IPEF.

“The Ministry of Foreign Affairs regrets that our country was not included in the first-round list of IPEF,” an official statement from Taiwan said Sunday, in response to U.S. national security adviser Jake Sullivan’s remarks the same day that noted that the U.S. has not included Taiwan at this stage.

“As an important economy, Taiwan plays a critical role in the global supply chain and is absolutely qualified to take part in IPEF,” the statement said.

Democratic and Republican members of the U.S. Congress pushed for Taiwan’s inclusion in the IPEF. President Joe Biden sent a delegation to Taipei in March, led by former top security and defense officials, to reaffirm Washington’s commitment to the island amid Russia’s invasion of Ukraine.

Despite the exclusion, the ministry said Taiwan remains hopeful that U.S.-Taiwan economic and trade relations will “enter a new stage.”

Taiwan’s inclusion would have upset China, which might have deterred some countries from joining the IPEF. Sullivan told reporters the U.S. intends to pursue deeper bilateral engagement with Taiwan on trade and economic matters. “We think it puts us in the best position for us to be able to enhance our economic partnership with Taiwan, and also to carry IPEF forward with this diverse range of countries,” he said.