Is there a Belt and Road Initiative 2.0 in the Making? – The Case of Central Asia Source: Journal of Contemporary Asia

Author: PBEC subject matter expert contributor, Dr. Yu Hong, Senior Research Fellow of the East Asian Institute at NUS in Singapore who also spoke at our Dialogues Summit 2021 shares his latest paper and insights with us on this topical area of trade and regional developments. 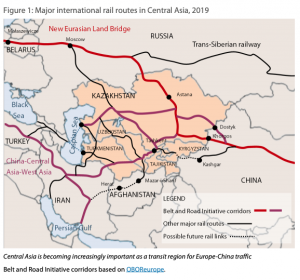 Despite China’s claims that the Belt and Road Initiative (BRI) is an economic co-operation initiative that will foster economic growth and industrial development for recipient countries, to create trade and investment opportunities, and promote peace in the world, the perception of the BRI throughout the world is becoming negative. In response to international criticisms of BRI implementation, in 2019, China’s President Xi Jinping pledged to deliver a readjusted BRI 2.0 that would generate benefits for all participating countries, not China alone. Moreover, due to the pressure from recipient countries, Chinese authorities and companies have been applying several readjustment measures in their BRI activities.

Central Asia is a priority region for China’s foreign policy under the BRI. BRI implementation has helped to expand China’s economic interests and influence in Central Asia. However, China’s push for the BRI implementation is China-centric, rather than a credible multilateral endeavour as claimed by the Chinese government. As shown in the case of Central Asia, the BRI involves a series of bilateral deals. There is no multilateral decision-making process involved in overseeing BRI or making investment decisions.