Mars, past and future

Mars is the planet that most closely resembles ours in the Solar System for geology and composition. However, its tenuous atmosphere of carbon dioxide does not shield the surface from cosmic radiation and ultraviolet light, as occurs on Earth, while the greater distance from the Sun means that the average temperature is far below the freezing point of water. Mars is more arid than any terrestrial desert: if all the humidity in the atmosphere condenses, the resulting liquid layer would be only a few tens of microns thick. Most of the water is imprisoned in the polar caps, the volume of which, however, is only a few thousandths of that of the Earth’s oceans.

The first detailed images of the surface of Mars, acquired by American probes of the sixties and seventies of the last century, showed a surface dotted with craters like the Moon’s, but sometimes also modelled by the action of water, especially in the most ancient terrains. The hopes born of this discovery led to the realization of the Viking program of NASA (National Aeronautics and Space Administration), the culmination of which in 1976 was the arrival on the planet’s surface of two probes equipped with experiments to search for life. The results, however, were substantially negative and led to an interruption in the exploration of the planet which lasted over a decade. In spite of the setback, that span of time allowed an in-depth study of the large amount of data collected by the probes and allowed a reconstruction of the history of Mars which is still valid today in its fundamental lines. In the most remote past, Mars was probably endowed with an atmosphere of carbon dioxide much denser than the current one, and the average temperature of the planet was similar to that of Earth due to the greenhouse effect, at least for some time. This would have allowed water, which is believed to have been up to ten times more abundant than today, to be present on the surface in liquid form, with rivers, lakes and, perhaps, seas. The weak gravitational attraction of Mars, whose mass is about a tenth of that of the Earth, however, would have caused the progressive loss of the atmosphere and water to the point of making the surface uninhabitable. The Martian climate may have remained similar to that of the Earth for hundreds of millions of years, a time comparable to that on our planet for the emergence of the first living organisms. This observation leads to a fundamental question, namely whether life could also develop on Mars. The processes that led to the birth of life from the chemicals present on early Earth are not well known. It is therefore not known whether it occurs spontaneously as soon as the conditions are met, or if, on the contrary, it is a rare event, which requires particular conditions that we do not yet understand. Determining whether or not life existed on Mars is therefore the beginning of the search for an answer to the question of whether it is common in the Universe, and whether there are other inhabited worlds besides ours.

The first automatic probe to successfully reach Mars after the Viking was the American Mars global surveyor, launched in 1996. In the same year what would become the first rover to travel the surface of another planet, the Sojourner of NASA, was also launched. Since then, over twenty missions from various space agencies have followed, albeit with varying degrees of success, launched by the European Space Agency (ESA), Japan, China, Russia and India. These probes have confirmed the theories on the past history of Mars and provided new information on the events that marked its evolution. Among the many scientific results of these years we recall the measurement of a residual magnetization of the most ancient crust, which indicates how the planet had in the distant past a magnetic field similar to that of the Earth and, perhaps, a plate tectonics; the detection of ice in the ground outside the polar caps, an extensive permafrost that constitutes a potential resource for future human settlers; the discovery of mineral deposits formed in the presence of liquid water, which could be the seabed of ancient seas and preserve fossils of any past bacterial life; the identification of organic molecules in the soil, which, although of probable abiotic origin, could have constituted the starting material for the evolution of life; the presence in the atmosphere of traces of methane, a gas that on Earth is also produced by bacterial activity and whose origin is one of the most debated topics in the study of Mars; the discovery of a saltwater lake below the southern polar cap, which could provide an environment suitable for primitive life forms sheltered from ultraviolet light, cosmic rays and drastic changes in temperature.

In 2020, three space missions have been sent to Mars. NASA launched the Mars 2020 Perseverance rover, which is equipped with a solar-powered drone to explore the terrain around the vehicle, and will acquire several dozen rock samples in preparation for a future mission to take them to Earth. The Tianwen 1 probe is the first Chinese mission to Mars, and consists of an orbiter, a lander and a rover to study the planet’s biological potential and search for traces of life. Finally, the United Arab Emirates launched its first space probe, the Hope Mars mission, to study the Martian climate and atmosphere. The launch of the Rosalind Franklin rover, built by ESA and the Russian agency Roscosmos, initially scheduled for the same year, has instead been postponed to 2022 due to a technical problem.

NASA has indicated the return of samples of Martian rocks to Earth as the main goal of this decade, while the landing of a human on the planet is planned within the next decade. The exploration of Mars is increasingly becoming an international enterprise: the ISECG (International Space Exploration Coordination Group) is the committee made up of fourteen national space entities, which aims to develop a strategy to take humans to Mars. This goal is no longer motivated only by scientific interest, but also by the desire to expand the human presence in the solar system by creating permanent settlements, starting from the Moon, up to establishing a Martian colony. There are now numerous studies of an economic nature on the possibility of creating a self-sufficient colony on the planet, and there is a concrete and growing interest in the private sector for mineral resources outside the Earth. Due to its colossal proportions, the permanent human presence on Mars is beyond the strength of a single government and appears destined to become an international enterprise in which it will be necessary to find a balance between geopolitical ambitions, the pursuit of profit and the needs of those who will leave the Earth to build their own future. The speed at which this process will take place and the ability of those involved to govern it will depend on many factors, which are difficult to predict today. For its supporters, among which the best known is perhaps the American billionaire Elon Musk, the colonization of Mars is an indispensable choice to safeguard humanity from extinction in the event of global catastrophes on our planet. The acceleration of climate change we are witnessing recalls the words of Stephen Hawking, who shortly before his death estimated that humanity has about 1000 years left before the Earth becomes uninhabitable. 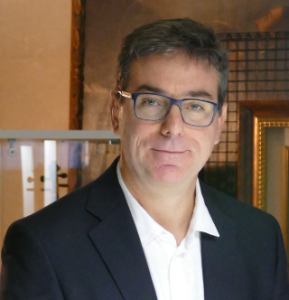 Dr. Orosei was born in Reggio Emilia, Italy. He studied at the University of Bologna and received a Ph.D. degree from the University of Rome “La Sapienza”. After spending two years as a Research Fellow at the European Space Research and Technology Centre in Noordwijk, the Netherlands, he moved to the Institute for Space Astrophysics in Rome, where he participated in the design and realization of instruments for solar system exploration missions.

He is a science team member of space experiments for the Rosetta, Mars Express and Jupiter Icy Moons Explorer missions of the European Space Agency, and for NASA’s Cassini, Mars Reconnaissance Orbiter, Dawn and Juno probes. He is the principal investigator of the MARSIS radar on board ESA’s Mars Express spacecraft, which provided evidence of the presence of liquid water beneath the South polar cap of Mars.

He is a member of the Italian Astronomical Society and of the International Astronomical Union. Main belt asteroid 1993 RJ3 has been named 19224 Orosei in 2007. He currently works at the Institute for Radioastronomy in Bologna and teaches a course of astrobiology at the University of Bologna.