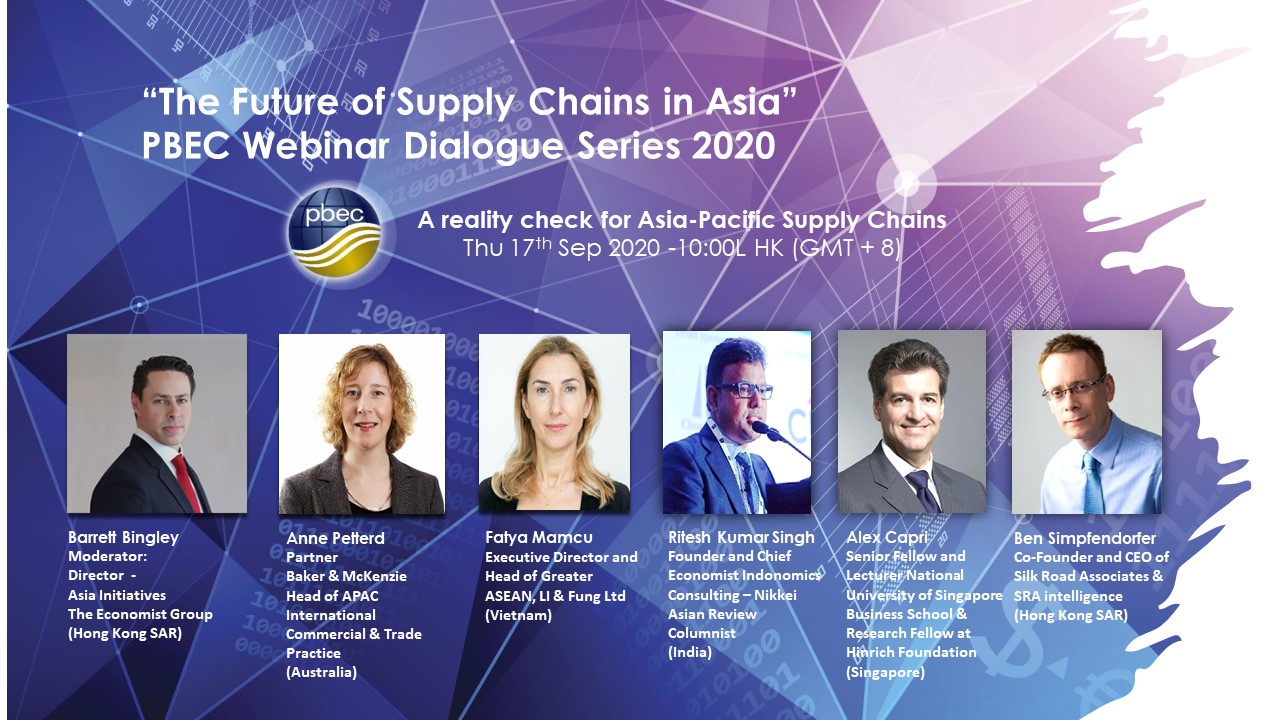 PBEC.org · The Future of Supply Chains – An Asian Perspective

Or listen directly on Soundcloud: https://soundcloud.com/pbec-org/the-future-of-supply-chains-an-asian-perspective

Barrett Bingley – Director @The Economist Group | AmCham HK Trade and Investment Committee Co-Chair | SOPA Board Member
An  experienced international executive with a focus on public policy, government relations, corporate growth and innovation. Over the past 22+ years Barrett has worked in Foreign Affairs, International Trade, Canadian federal politics, private equity, corporate services, media and publishing. He is an active member of the business community in Hong Kong, who enjoys being the Master of Ceremonies, Moderator duties and chair of committees,  having held Board Director and Committee level leadership positions for several organisations including The Society of Publishers in Asia, The Canadian & American Chambers of Commerce in Hong Kong. He likes to focus primarily on policy, public affairs and government relations in these roles.

Fatya Mamcu -Executive Director @Li & Fung Limited Greater ASEAN Regional Head
Fatya Mamcu is an Executive Director at Li and Fung Limited having worked for them for the past 21 years. She is based in Vietnam and is the current ASEAN Regional Head for the Group running the sourcing and operations divisions, she has had a birds eye view on DFI in Manufacturing that has been pouring into Vietnam these past few years. Fatya is well seasoned in disruptive practices and the digitalisation of supply chains in the region.

Alex Capri (Senior Fellow & Lecturer & Research Fellow @NUS Business School & Hinrich Foundation)
Alex has over 20 years of experience in value chains, logistics and global trade management, both as an academic and a professional consultant. He has advised many of the world’s best-known companies on cross‐border projects in more than 40 countries and he has worked in some of the most challenging regulatory environments throughout the world.