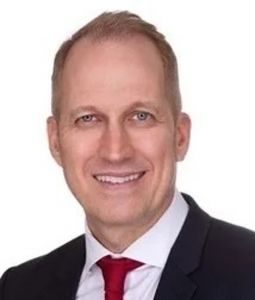 Robert Koepp is the founder and principal of Los Angeles based Geoeconomix, an independent source for insights into the economics moving global markets, driving technology, and influencing government power.

An internationally active commentator, writer, and media producer, Rob founded Geoeconomix following years of global experience in analysis and thought leadership in the fields of economics, finance, business strategy, and public policy. In addition to his work at Geoeconomix, he serves on the Advisory Board for the Hong Kong-based fintech company, FinFabrik, the Advisory Council of the Center on AI Technology for Humankind (AITH) at National University of Singapore, and is a lecturer at the College of Business at California State University, Long Beach.

Prior to establishing Geoeconomix, Rob served as Director and the chief economist of the Corporate Network in Hong Kong for The Economist Group, parent company of the weekly publication, The Economist. He has previously authored two full-length books, Betting on China: Chinese Stocks, American Stock Markets, and the Wagers on a New Dynamic in Global Capitalism and Clusters of Creativity: Enduring Lessons on Innovation and Entrepreneurship from Silicon Valley and Europe’s Silicon Fen. Rob has written a wide range of in-depth reports covering such topics as disruptive technologies, digital economics, Big Data, China’s sports industry,

the Belt-Road Initiative, Asian business trends, and comparative government technology industrial policies. He frequently appears on television and at public forums discussing trends in economics, geopolitics, media, and business. A graduate of Pomona College (where he was a Truman Scholar and Watson Fellow) with a degree in Asian Studies, Rob earned an MBA from the University of Cambridge.

“Rob Koepp’s typical mantra on China is, ‘I’m not bullish on China; I’m not bearish on China. What I strive to be, is balanced on China.’ Rob recently returned from Greater China to his home country of the USA in Q1 2020, from some 15 years in-country, the last three of which were spent in Hong Kong—where he observed the protests, and speaks to them like few others can—he offers unique expertise and insights on China, its people, culture, politics, markets, and evolving role in the global economy and we welcome his expertise to bolster PBEC even further.” Commented Michael Walsh PBEC CEO.

He went on to stay, “What sets Rob apart from other commentators on China and Asia is his unflinching perspectives on the forces propelling the dynamics of the Asia-Pacific region. In terms of his approach to understanding China, he stresses that to be truly balanced requires having a nuanced appreciation of what makes the country work. He recognizes that the Chinese government is officially Communist (in its own words, practicing “socialism with Chinese characteristics”) yet he also sees how when it comes to business, Chinese state and private enterprises can be as capitalistic—in some ways, more capitalistic—than the most competitive of Western businesses. Rob can also explain the various ways that Chinese tech companies are protected by the notorious Great Firewall of China, yet also have legitimately succeeded in producing some ground-breaking innovations – contrary to popular believe. He likewise can just as easily discuss China’s new ‘social credit system’ which uses a vast, interconnected surveillance apparatus to track your every move—something so powerful as to do everything from prolonging the pain of a personal bankruptcy to shaming you publicly if you jaywalk! Frightening in its implications to those of us who value individual freedoms and privacy, Rob can also relate to the many ordinary Chinese who sing the system’s praises because of how it delivers safety and peace of mind for law-abiding citizens. As we say, his views on China are exceptionally… nuanced. Its exactly what we welcome at PBEC as the voice for business in the region.”