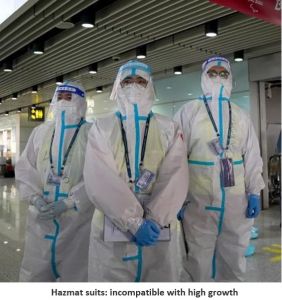 ‘Zero-Covid’ means zero growth. That was one way of responding to China’s latest economic data at the end of last week, which showed that GDP growth slowed to 0.4% in the second quarter compared to a year ago.

It was the second worst performance in 30 years and trailed only the first quarter of 2020, when the Chinese economy shrank 6.8% during the initial outbreak of Covid-19.

GDP actually fell by 2.6% in the three months to the end of June measured against the previous quarter. Performance was better in June than in the previous two months, allowing a little optimism that the worst may have passed. But the economy only expanded 2.5% in the first six months of the year, well below the levels needed to meet the full-year growth target of “around 5.5%” set by the State Council for 2022. 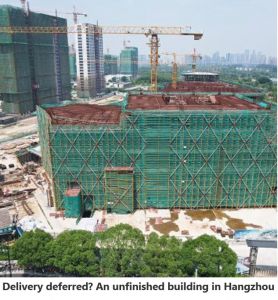 Many consumers in China shop on Taobao. Part of the reason is that they know they can request refunds if the goods turn out to be defective. Trust is at stake. Sellers on the platform risk their reputations being trashed by unhappy buyers on review sites.

Are buyer rights’ properly protected if the purchase is a property, however, probably the most important investment for many people? This has been a hotly-debated question over the past week as thousands of frustrated homebuyers join a growing revolt by refusing to pay their mortgages on unfinished residential projects.

Many of them said they wouldn’t be making any further payments until developers fulfilled their contractual obligations to deliver finished apartments. The protest may tarnish their social credit scores and even put their downpayments at risk. But the protesting group seems unbowed. And their defiance is starting to prompt larger questions about the robustness of the Chinese banking system, not to the mention the prospects of the beleaguered real estate sector.

Jiangxi was the ‘revolutionary base’ from which Mao Zedong first gained control of the Communist Party of China. It is also the province from which the first shots in the “Stop Mortgage Payment” campaign were fired. Disputes between angry homebuyers and developers that fail to deliver pre-sold homes on time aren’t unprecedented. But cases have increased notably since 2020, when the real estate sector was first hit by the double whammy of the pandemic and credit tightening from the central government known as the ‘three red lines’ policy. Developers were suddenly struggling for cash, creatingmajor delays in construction and leaving many projects in limbo. Homebuyers were left with debts, but no homes.

Frustration has been building for months. At the end of June, a group of buyers in Evergrande Longting, a project developed by the beleaguered China Evergrande in Jiangxi’s Jingdezhen, published an open letter claiming that their legal rights as consumers and investors had been ignored since construction of the project came to a halt in May 2021 (just months after about 900 units were pre-sold). Click HERE to read more.

PBEC members are invited to activate their own complimentary subscription to Week in China and its archive of full weekly issues, certain articles and books (such as China’s Tycoons) by using this complimentary URL: www.weekinchina.com/pbec