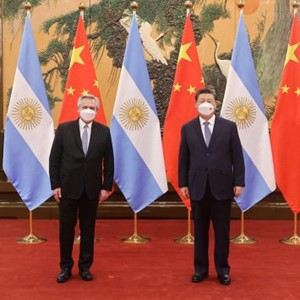 Argentina has joined the BRI

Argentinian leader Alberto Fernandez wouldn’t have been counting on Olympic glory when he flew into Beijing earlier this month – his nation’s athletes have competed at 19 Winter Olympic Games without winning a single medal.

But President Fernandez had bigger fish to fry in his meeting on the sidelines of the Games with Xi Jinping, his Chinese counterpart. The summit was headlined by Argentina’s enrolment as the 21st country from Latin America and the Caribbean for membership of the Belt and Road Initiative. Argentina is the largest Latin American economy to join to date, with Mexico and Brazil yet to make the same commitment.

“It is excellent news. Our country will obtain more than $23 billion from Chinese investments for works and projects,” Fernandez declared, with a list including $8 billion for a nuclear power plant outside Buenos Aires and another $1.1 billion for an upgrade to the city’s electricity grid. Read More

To view the latest WEEK IN CHINA Edition Issue 573 with articles on Midea wants to be a major player in electric cars, China’s digital currency challenges Visa at Beijing Olympics & Fifty years after Nixon met Mao, are there lessons for today’s leaders? Click Here